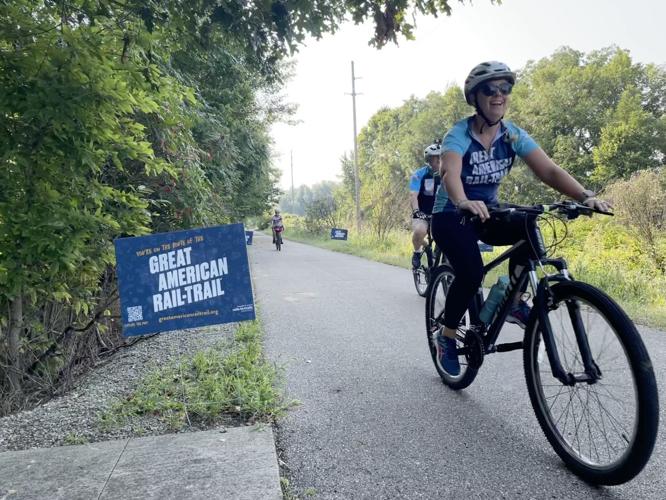 Participants of three-day bike ride across roughly 100 miles of Indiana trails approach an intersection in Northern Miami County recently. The ride was organized by the Rails-to-Trails Conservancy. 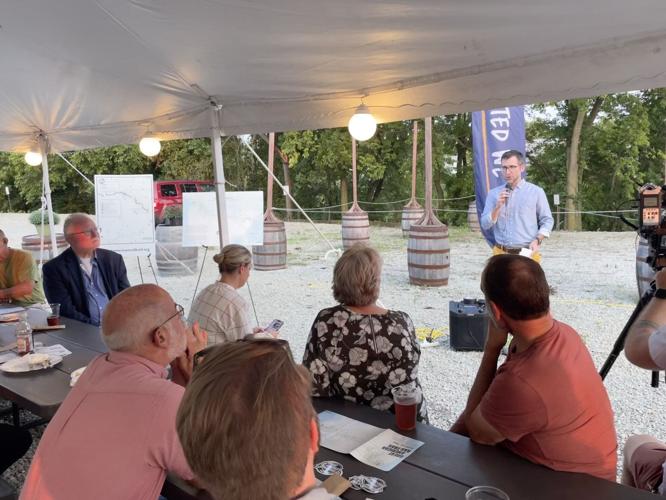 Kevin Belanger, with the Rails-to-Trails Conservancy speaks at an evening dinner in Peru about state and national bike trail projects. 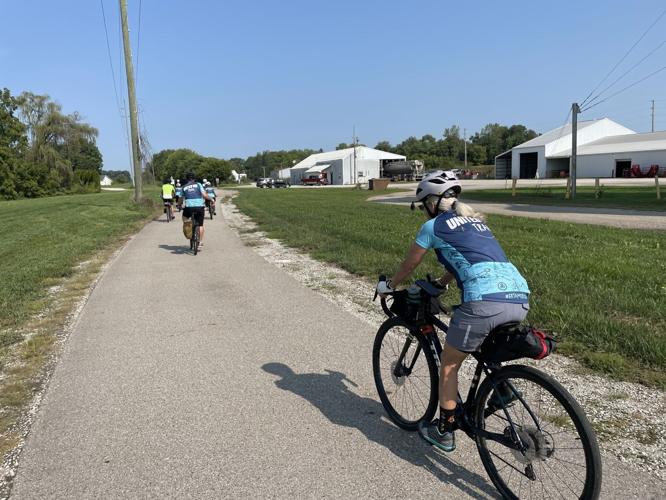 Riders approach Rochester near the end of a three-day bike ride organized to promote the Great American Rail Trail and other state-level bike trail projects. 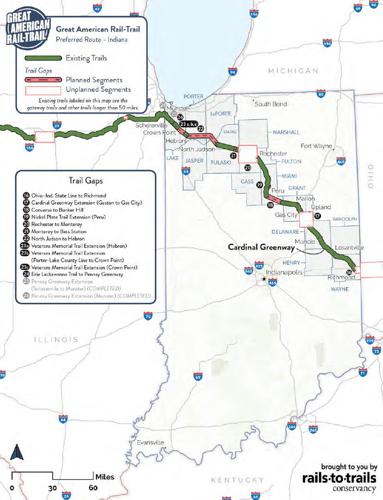 ABOVE: A map of existing and planned trails across Indiana that will be part of the Great American Rail-Trail. BELOW: The trail would connect Washington State to Washington D.C., crossing 12 states. 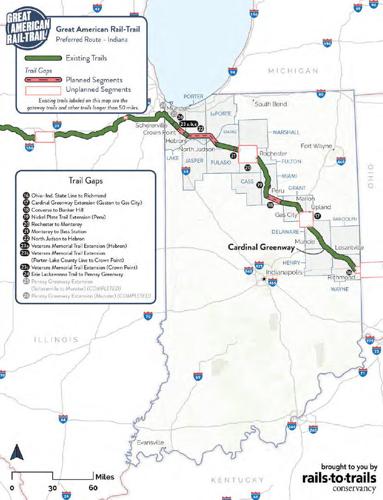 Participants of three-day bike ride across roughly 100 miles of Indiana trails approach an intersection in Northern Miami County recently. The ride was organized by the Rails-to-Trails Conservancy.

Kevin Belanger, with the Rails-to-Trails Conservancy speaks at an evening dinner in Peru about state and national bike trail projects.

Riders approach Rochester near the end of a three-day bike ride organized to promote the Great American Rail Trail and other state-level bike trail projects.

ABOVE: A map of existing and planned trails across Indiana that will be part of the Great American Rail-Trail. BELOW: The trail would connect Washington State to Washington D.C., crossing 12 states.

At trail crossings on county roads and in towns large and small across more than 100 miles through much of the state, you might have happened upon them. A small group of bike riders took to Indiana bike trails for three days this week to spread the message of an effort to better connect those trails, not just across the state, but across the nation.

“We have huge opportunities,” Mike Kuepper told a gathering of local and regional officials at a Wednesday dinner in downtown Peru.

Kuepper, who is president of the Nickel Plate Trail Association, had ridden earlier that day from Muncie to Peru. During the trip, he, along with officials from the Indiana Department of Natural Resources and the Rails-to-Trails Conservancy, a national nonprofit organization, made stops in Marion’s Hogin Park for a trail-side lunch and in Converse for an ice-cream break at the Big Dipper.

During the ride, the group also took breaks to be shuttled along two gaps in what Kuepper and others hope will soon be a continuous trail between Richmond and Rochester.

Earlier this year, Kuepper’s entirely volunteer organization secured a $3.6 million grant – from the Indiana Next Level Trails program – to build a spur that will connect Grissom Air Museum to McGrawsville, to the east. That trail will cross the Nickel Plate Trail, which already runs north and south between Kokomo and Rochester. That spur, once completed, will make up about half of what is needed to connect the Nickel Plate to Converse, and Kuepper says he is still working on acquiring the land needed to make that final push east.

Once the connection between the Nickel Plate and the Converse Junction Trail is made, there would be only one other gap – about 11 miles between Gaston and Gas City – before the two larger trails in the network – the Nickel Plate and Cardinal Greenway – are connected, linking Richmond to Rochester across more than 100 miles.

“We view connecting those two together as one of our highest priorities,” Mark Becker, Program Manager with the Indiana DNR Next Level Trails effort, told those gathered for Wednesday’s dinner in Peru.

The Next Level Trails program is making plenty of other connections around the state as well. In the last round of funding that helped Kuepper get the McGrawsville spur started, the DNR program injected $150 million total into the state to build new trails – the largest amount in state history.

Connecting the Nickel Plate and Cardinal Greenway is attractive to many for several reasons, not the least of which, Becker explained, is that he and others have found that as those miles of uninterrupted trail grow, the trails themselves start attracting people from outside the immediate area.

Even at 50 miles, she said, volunteers and officials who manage the trails start to notice a draw. It increases, especially beyond the 100-mile mark, according to Horton.

“You start to see people seeking out those corridors as destinations,” she said in a Friday interview.

Horton, too, had been on the three-day ride across Indiana. Starting in Richmond, the group rode to Muncie on Tuesday. They gathered again on Wednesday morning to make the ride between Muncie and Peru. On Thursday, they finished after a 25-mile ride from Peru ended with a lunch at The Dam Landing in Rochester.

Organized by the Rails-to-Trails Conservancy, the ride was meant to highlight not only the effort to make those remaining connections in the immediate region, but to further connect Rochester to the Chicago area and Richmond to Ohio. The overall vision is to continue those connections as part of a national effort that Horton’s organization calls the Great American Rail-Trail.

It’s an ambitious project that would connect Washington State to Washington D.C. with uninterrupted trails across 3,700 miles and 12 states. Today the Conservancy touts more than 2,000 completed miles as they continue their work.

Kevin Belanger is the Conservancy’s project manager for the effort. At Wednesday’s stopover in Peru, he spoke to county and city officials who attended the dinner about estimated impacts.

As guests ate dinner on the south bank of the Wabash River at McClure’s Granary and Toll House, Belanger said that the Rails-to-Trails Conservancy estimates visitor spending at just shy of $230 million annually across the national trail. In Indiana, he said, they estimate the completed trail would see 1.5 million visitors from outside the area annually, bringing in more than $13 million per year.

It’s a potential impact that others are already taking notice of.

Steven Ray, executive director at the North Central Indiana Regional Planning Council, says that the town of Kirklin, in Clinton County, is already looking at building spurs to connect the town, not only to Frankfort, but to the Monon Trail, which currently connects Sheridan to Indianapolis through Westfield and Carmel, as well as connecting into the Nickel Plate Trail to the east in Kokomo.

But there are other benefits beyond that visitor-driven economic impact, Ray said. The trails are an added amenity that can make an area attractive to businesses looking for a location where their employees would want to live.

“It’s not just about chasing smokestacks, but it’s also making it a livable community,” he said. “These trails can start to bring economic life back.”

Kuepper said he has seen those benefits before, too.

A Peru businessman, he also once sat on the board at Dukes Hospital. In those days, before the Nickel Plate Trail was completed, the promise of it coming was a sizable recruiting tool.

“The idea that a rail trail was coming to Peru, actually encouraged doctors,” he said.

From a regional perspective, Ray, whose organization works in Fulton, Cass, Miami, Howard, Clinton and Tipton counties, says that having trails running through them just makes sense.

“Our aspirations are to connect all six of our counties,” he said Wednesday night.

To do it, the volunteer organizations and officials behind the efforts still have to negotiate with landowners along the corridor to buy land or gain access.

It can be a tough sell sometimes.

But Fred Kasten, a Pulaski County farmer, says he hopes folks can see the greater good.

Kasten doesn’t have a trail running through his property, but he told the attendees at the Peru dinner that he remembers not being happy when the rail lines that used to carry his grain to market closed down.

He wasn’t alone, but he said he adapted. He found other ways to move his crops and he even got out on the trail.

“And you know what, I loved it,” he told the group.

Now, in his 80s, he’s a regular trail rider who says he sees the benefits, not only for himself and the families he encounters out there, but also to the small, rural towns that now have people from outside regularly riding through.

“Every one of them people is carrying a wallet,” he said. “I understand it does help the community.”

For more information about the Rails-to-Trails Conservancy and the Great American Rail-Trail visit www.railstotrails.org.

Jared Keever, Chronicle-Tribune executive editor, may be reached by email at jkeever@chronicle-tribune.com.

Sorry, there are no recent results for popular videos.